I’ve been playing a lot of Far Cry 5 over the past week. It’s been a number of years since I’ve ventured through the tower-climbing, shoot-and-burn-everything-in-sight adventures of the Far Cry series. Far Cry 4 didn’t grab me like Far Cry 3, Far Cry Blood Dragon was the balls, and I didn’t even smell the packaging of Far Cry Primal. So I was quite looking forward to dipping into Hope County for some mindless killing of gun-crazed, brainwashing cult members. While I’m enjoying my time with the game, there’s a hidden message in Far Cry 5 that I just can’t seem to shake.

Just to get my general impressions out of the way, I believe that Ubisoft has done a great amount of work to ensure that there’s always something for players to do in Far Cry 5. Talking to the heavily-armed locals usually opens up new side quests, other NPCs, prepper stashes which reward you with perk points and cash, as well as general mayhem opportunities. It’s a fun way to drip-feed the mission structure — even the aforementioned collectables aren’t found on the map until you talk to a player who sets you on a quest to find them. There are really smart, if not somewhat sideways design changes, which keep the game feeling fresh, even after 15 hours of play.

And holy shit is Far Cry 5 a gorgeous game. I’ve been mostly playing with my Platinum headset and the sound design almost makes you feel the bugs buzzing around your face when you’re exploring the wilds. But underneath all of the fun and mindlessness and beauty, there’s a very dangerous undertone to everything you do.

To be without a gun in the world of Far Cry 5 is to be weak. You see it when you first begin the game and proudly wear several bullets over and over until you tire of the white-lotus loading screen. (sidetone: this loading screen makes me want to really kill the cult leaders with their man buns, desert photographer clothing and revelations quotes.) It’s not until you acquire guns and lots of bullets that you finally feel powerful enough to tackle the challenge ahead.

“In the world of Far Cry 5, guns are the only path to freedom.”

This is even further displayed as you trek from outpost to outpost liberating the civilians of Hope County. When you happen upon hostages being held by the cult, the hostages are bound, on their knees, pleading for mercy. Once you untie the hostages they scream and cower (in a hilarious, glitchy, video game way) like helpless “eek, a mouse” housewives of 50’s advertising. But once these same scared denizens pick up a gun…hoo boy. Their shoulders pull back, their chest comes out and they’re a fucking Airborne Ranger within seconds. 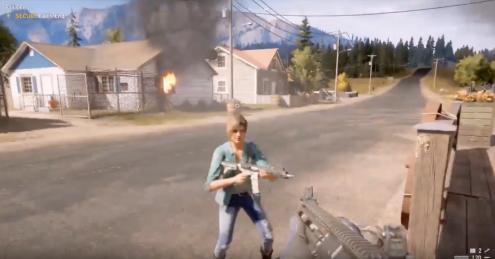 The evolution from helpless victim, to John McClane

In the world of Far Cry 5, guns are the only path to freedom. Even the peoples of the game’s world espouse uber 2nd Amendment rhetoric, like “We’re on our own to protect our lives, the government ain’t gonna help us.”

Besides becoming John Rambo as soon as they strap heat, the citizens of Hope County all have doomsday prepper bunkers. These are where you find the game’s best loot — almost as if it celebrates the fire and brimstone end of civilization that the bunker builders believe in. Finding these bunkers, unlocking their locked safes and discovering “Perk Magazines” literally makes you more powerful. So the more you engage with the guns and doomsday message, the stronger your character becomes. I doubt this was intentional, but Ubisoft may be unwittingly championing the small-town, anti-immigration, anti-Muslim middle Americans who continually vote against their own best interests.

This sends an unsettling message considering how Far Cry 5 was received when it was first announced. It was billed as a romp through the gun-crazy state of Montana — combining the roiling “economic strife” (blatant racism) and oppressive rule of the government class. What Ubisoft ended up releasing is an homage to every gun-loving Second Amendment die-hard who believes the only solution to all of life’s problems is curling up to their cold steel.

It doesn’t help matters that Hope County is as diverse as a Verizon Wireless commercial. Black neighbors fighting alongside white neighbors, no racial slurs, latinos being welcomed as first class citizens in this backwoods haven — it’s very unbelievable and devoid of any teeth. If Ubisoft really wanted to capture the essence of these small-town Americana havens (I’m from one), they could have sharpened the game’s tone to more aptly reflect the racism, fear and willful ignorance that runs rampant in middle America. Maybe a smarter gameplay choice would have been to confront that racism and division by uniting the disparate groups in the area to the same cause. Building racial bridges as opposed to just naively assuming there’s no dark-skinned fear in Montana seems irresponsible.  Instead, as long as everyone has a gun, they’re on the same side.

Maybe that’s not the game Ubisoft wanted to make, but after living in Trump’s America for almost two years, the reality of the day limits the fun I, personally, am having with the game. Now, whenever I stumble across these little ironed out, gun-and-racial-utopia moments, I feel icky. Like I’m finally realizing the actions of what I’m doing. Which is, playing as a heavily armed cop who violently and indiscriminately murders thousands of people because the law is on your side. At the end of the day, your character is still a gun-toting mass murderer.

Rather than emulate the excellent statement in a similarly topical game, Wolfenstein 2, Far Cry 5 does its best to upset no one, and please everyone. Which, from a gameplay standpoint, it exceeds at. But all of these factors piled on top of one another leaves me wishing that Ubisoft would have taken a deeper dive into America of the now.