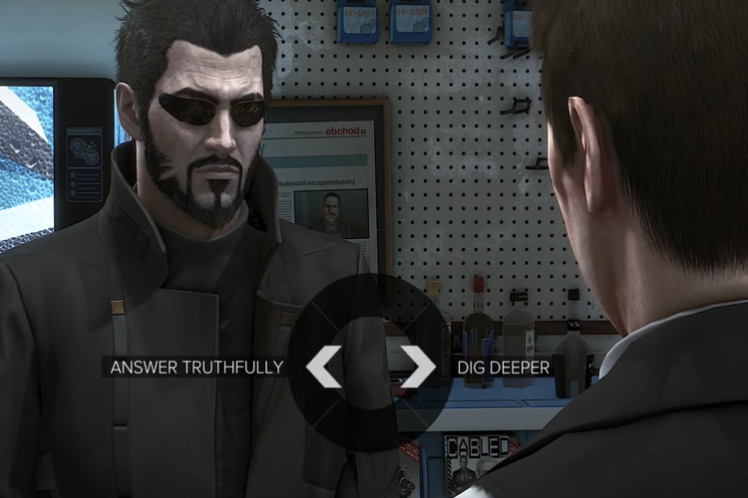 Yup, you can totally level-up IRL.

When I plunk down $60 on a brand new gaming experience, you better believe I want to squeeze every ounce of enjoyment out of that sucker. Before I dive into my gaming revelation, a little context: I’ve been a gamer since the days of the original NES. So that puts me in a unique category of today’s gamers. By e-sports standards I’m at least six years past retirement age, and if you ever watched me do a stream playing through a pseudo-open-world game like Deus Ex: Mankind Divided, you’d be bored to death. See, I’m what’s referred to as a “completionist.” That’s when you take your time with every game and fully explore the world in search of hidden items, power-ups, seemingly inaccessible areas and bragging rights by way of “Trophies” (or Achievements).

Why do I play this way? The rationale is this, I spend $60 on a game and typically don’t have the time to complete said game until the next big game comes out and I feel obligated to buy it. Because of the way I play, I have amassed an ever-growing list of games I’ve half-completed. Why must I buy the newest game that comes out? I don’t, but if I don’t pick up a game as soon as it comes out and at least dive into it, I miss out on the conversation surrounding the game. As a regular listener to the Giant Bombcast and Kotaku’s Splitscreen I will often have to skip past certain parts of the podcasts to avoid that internet golden term, “spoilers.”

I used to chastise the gaming industry for making games that are too big. Which, when you think about it, is a really dumb argument. Developers work notoriously long hours, under tight deadlines and have the ever-present Sword of Damocles dangling above their head by way of Metacritic scores, sales numbers and investor expectations. So it makes sense that they implement a bevy of content to keep gamers in the worlds they spent years creating. The pattern that develops is one where I forego the main storyline and tinker around with all the extraneous content instead of making progress. This translates to a game that should take 30 hours to complete, clocking in at 50 hours for me because I pick every damn lock, hack every terminal and read every in-game book, in-game email and in-game interaction. After 26 years of playing games, the realities of a full-time job, a book nagging me to finish it and attempting to maintain some kind of personal life make this method of play unsustainable. So last night I had a breakthrough while playing Deus Ex: Mankind Divided. I’ve been playing games wrong…and, oh my god, I’ve been playing life wrong!

See, one of the most impactful lessons I’ve learned in life is that change is inevitable. I would love to spend an entire weekend doing nothing but gaming. When I was a kid I’d wake up at 6am, start playing, eat some cereal around 7:30, keep playing, make a sandwich around 10:30, keep playing and then maybe make my way outside around 1pm. That’s because I was a kid and didn’t have a job or any responsibilities. So after I spent 20 minutes last night trying to sneak into a rave to stop the flow of a drug called “Neon” I thought to myself, what the hell am I doing? I was nine hours into a 30 hour game and I literally hadn’t completed a single story mission. I uttered a quick, “f**k this” to myself and abandoned my snooping to complete the first main story mission in the game. And boy did it pay off.

Within 30 minutes of undertaking the storyline, I learned two new skills that would help me progress in my completionist endeavors. See, the concept of progress in a game is a lot like life. You enter into the world, confused, unskilled and pretty much terrible at everything. Then after some time, you “level up.” You develop skills, you find out what you like and what you don’t like. You figure out how to play your own storyline and gain a general idea of how you want to conquer challenges. Suddenly something that would have taken you 30 minutes to accomplish can be done in five. Since I wasn’t leveling up my character, I was making the game more challenging than it needed to be. After an hour of avoiding side-missions and only completing story missions I noticed my character leveled up at a much faster rate — as you gain far more XP for finishing main missions. Now that computer terminal I had to repeatedly try to hack into took me a mere 30 seconds and I got in on my first try.

Patterns are an evolutionary constant. Humans are especially prone to falling into patterns, at least in the case of yours truly. That’s when life becomes stagnant, because as a species we crave exciting, new experiences. It was incredible how my mindset shifted when I made a slight tweak to my gaming formula. I realized those hidden items, locked doors, giant safes loaded with credits and exotic weapons would always be there. If I really wanted to take the time to seek them out, I could always backtrack when I’m powerful enough to easily tackle the challenge.

Out of curiosity, I wanted to see how many games over the past year that I bought, sunk an insane amount of hours into and never completed. When I tallied the hours of time I spent in my backlog I hung my head in shame. Observe:

Dragon Age: Inquisition (22 hours in… who knows how far in?!)

No Man’s Sky (okay, this one is a stretch because it’s literally a universe — but 24 hours in with infinite hours left)

That’s almost EIGHT DAYS of my life gone, with nothing to show for it. I couldn’t tell you about the insane ending of Metal Gear Solid V, because I’ve only heard tales of it. I have no idea what happens to Ciri in The Witcher 3 and I don’t know if I’ll ever be able to share my thoughts on what exactly is at the center of the galaxy in No Man’s Sky. So why do I keep subjecting myself to this style of play? Better yet, what styles of play and patterns do I see developing in life because I’m unwilling to make progress?

Well, for starters, I’m a procrastinator. I’ve been working on the same book for four years and I’ve had about 15 complete rewrites. I’ve been hovering around 70k words for almost a year now and that number isn’t moving up. Like Deus Ex, I need to stop tinkering around with the unnecessary stuff and get into the main storyline. I have decided no more starting from the beginning. It’s time to power through and gain the experience of ACTUALLY COMPLETING the book, then I can enjoy my “second play-through” after I finish the main mission. While it’s an impressive statistic to say that I sank 300+ hours into writing my book, it becomes a matter of quantity vs quality, and an unfinished book is not quality, it’s a unknown variable.

I find it fitting that my hobby, which is viewed by some as a waste of time, struck me with the revelation that I’m living life the same way I’m playing games. I’m so focused on taking my time and trying to do everything at once that I’m standing in the way of making progress. And without progress, I might as well add “Life of Levi: (280,512 hours in — 1/4 complete)” to that list of games.

How do you play through your games? Is it time to reassess how you spend your time? I’m genuinely interested to know your stories, so please share below!